It’s been awhile seen we’ve seen Brad Pitt on the big screen and then, like an unexpected gift, he’s starring in two major films. There has been Oscar buzz about his hyper-masculine stunt man, Cliff Booth in Once Upon a Time In Hollywood. Pitt’s character has a laid-back vibe and his charm and beauty still burn bright. He and co-star, Leonardo DiCaprio have a great chemistry together. When his character takes off his shirt to fix a rooftop tv antenna, it calls to mind his first major role as the charming thief and one-night stand for Geena Davis in Thelma & Louise.

In contrast to the his role in Once Upon A Time in Hollywood, Brad Pitt is the astronaut Roy McBride in Ad Astra. Once again playing a hyper-masculine character but in this role, we see the toll his career following in his father’s footsteps has taken on family life. Estranged from his partner, presenting a cool facade and barely registering a heart beat…this character is starting to question the orders bestowed on him by the military complex.

Ad Astra, directed, co-written and produced by ‎James Gray is a meditation on the father/son relationship. This intimate film is science fiction that treats a spacesuit-clad traveler hopping a spaceship to the moon like it’s a daily commute. He might as well be wearing a suit and tie…and indeed in one scene, Brad Pitt’s character is carrying what looks like a briefcase. Roy McBride may be living in our distant future but he’s traveling across space dealing with similar 20th century problems: an unsuccessful romantic relationship, a stressful career and a distant father. That father is played by ‎Tommy Lee Jones and he’s floating around Neptune and may be responsible for earth-shattering power surges. This makes McBride’s mission to reunite with his father a rather urgent affair.

There are beautiful space interludes and the race across the moon is a tense and exciting scene. Occasionally obscured by their fishbowl helmets, who is shooting at whom can be difficult to discern. But beyond a few confrontations in space and the novel mode of travel, Ad Astra is a contemplative film that could be set anywhere. Brad Pitt communicates the inner monologue of our conflicted astronaut with reserve; he seems weighed down by his mission and his angst. As he makes his journey, his companions fall away. Donald Sutherland, once a trusted comrade of his father’s, suffers more than a change of heart. Some are killed by pirates; some by McBride himself. He’s alone to face his father issues and eventually, his father.

The first half of the film is driven by the urgency to complete this mission and the need to make contact with the space station McBride’s father commands. Whether this is a rescue mission or an assassination is the final mystery. There are women in the film: Liv Tyler as the abandoned love interest and ‎Ruth Negga‘s Administrator — who provides McBride with crucial information but isn’t even given a name. They provide warmth and emotion and are sorely missed when not on the screen. Our conflicted hero must travel to the moon and then to Neptune and yet, once his mission is complete, his journey seems to skip through time and space as he hurtles back to earth.

Ad Astra ends on a triumphant note and it’s good to see films that are dealing, even in oblique ways, with our fears about Climate Change. What’s missing in the film is a deeper connection to our closed-off astronaut. His issues with his father are like our issues with the planet, they seem too big to overcome. Brad Pitt may be opening up the conversation about what it means to be a man, a father and a lover but it’s difficult to separate his roles from his public falling out with Angelina Jolie. In his movie roles, he seems to be exploring how to navigate his public and private personas.

Drinks with Films Rating: 2 International Space Station squeeze bottles of H2O (out of 5)

Do you sit through all the credits? Most fans of Fantasy/SciFi films do. This is particularly true of the films in the Marvel Comic Universe (MCU). Most of the films have a teaser, a cliffhanger, or introduce a character that will star in the next film. I like a little heads up from reviewers and friends if there’s a good reason to sit through a credit sequence. My particular favorite was a quick flash of the Avengers hanging out eating sandwiches; not a plot twist, just a fun moment of the Super Heroes relaxing. I have friends who won’t go see Spiderman: Far From Home because they haven’t seen Avengers Endgame. This newest, Jon Watts-directed Spiderman film happens AFTER the sequence of events in the Endgame film. So can you see this film if you missed the other film and should you wait for the last credit to roll?

First, you CAN see Spiderman: Far From Home if you haven’t seen Avengers Endgame but only if you at least know the general plot line of that film. If you’ve stayed away from reviews, don’t ever listen to teenagers talking and/or you live remotely with no WiFi–okay, maybe wait to see the re-release of that last film. It’s just eclipsed Avatar in dollars made at the box office (not counting Gone With The Wind). So you have your chance…

Second, stay for the mid-credit sequence if you’re a big fan of Spiderman films and for the second reveal at the very end if you like plot-twists and surprises. If you’re like me, wondering why the studio needs to keep reinventing this character…you can skip the wait. I enjoyed this version and find Tom Holland charming and Zendaya’s sarcastic take on Mary Jane refreshing. I’m also a fan of Jake Gyllenhaal, Jon Favreau, and Marisa Tomei, so I enjoyed seeing them on screen. The young actors who play the sweethearts of the film are a delight. And any film that wants to portray the Dutch as lovely people is A-OK in my book.

Was the plot silly? The action sequences too long? Did the characters act in ways that made little sense save to advance the plot? Well, of course! It’s a 2-hour film crammed with visits to other countries so that the “heroes” can wreak havoc to some recognizable landmarks. The excuses for there being no other Avengers available to help this teenage boy fight an International-World-Threatening-Villain are as lame as the chaperones sent on this high school trip. Yet if you endured the 3-hour Avengers Endgame and the dark, dark plots of that film and the one before it…this will be a relief. A light comic romp with some well-drawn characters. Not as enjoyable as the animated Into the Spiderverse, or half as clever…but a good bet that the MCU is back to having a little fun.

Drinks with Films Review: 3 cups of tea (out of 5), a tip of the hat to the London Bridge 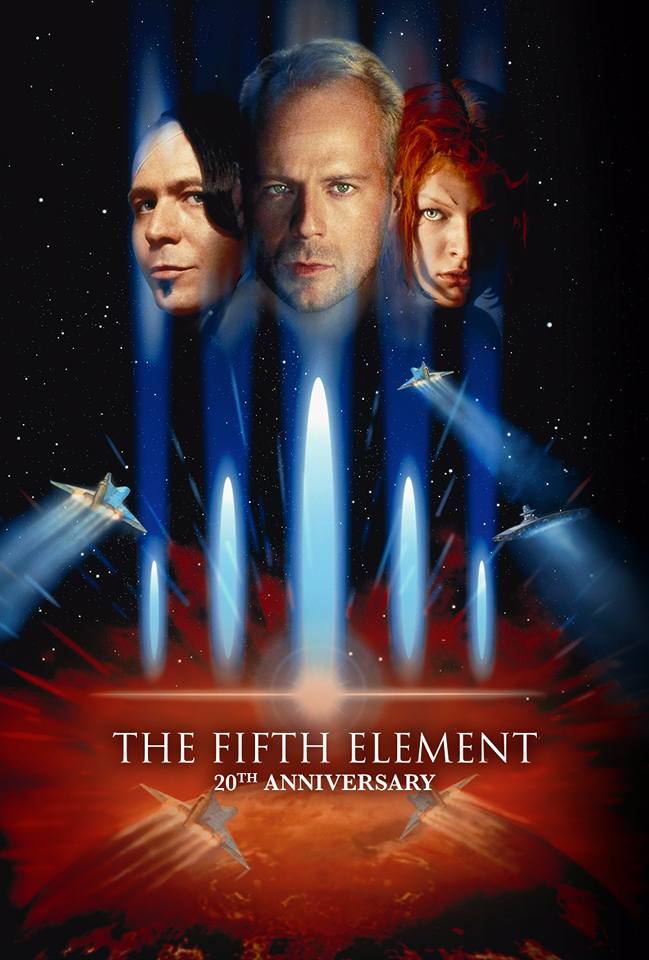 A throwback film that feels FRESH and a current film that is full of references to the past but already feels STALE!

Today there’s a good chance you can catch a screening of The Fifth Element at your local cineplex. Fathom Events is releasing the film May 14th and 17th as the studio is getting out the press for the next Luc Besson film, Valerian and the City of a Thousand Planets.

This has been a favorite film of mine for many years and I wasn’t worried that the special effects would look cheesy…I’ve seen it many times since that first awesome experience at the movie theater. I still found the story engaging, the cityscapes and costumes (Jean Paul Gautier!) fantastic and found myself on the edge of my seat at the ending with a tear in my eye. It was so fun to hear the crowd cheer at the end of the film and hear the exiting crowd exclaim at how well the movie still holds up.

In comparison, Guardians of the Galaxy, Vol 2 is a far weaker film. Yes, there are some wonderful set pieces and a few emotionally-resonant moments between the characters, but what was with that convoluted origin story? Wow, was I bored with the 70’s-themed side trip down memory lane, and any time the film stopped at Planet Ego, the story stalled. It made a gazillion dollars on Opening Weekend and will continue to gross the big bucks, but amid the flash and throwback tunes and the snappy dialogue, where was the story? Why did we care about the gold-dipped aliens and their plan for vengeance?

It felt as if they built all these cool sets and created all this cool SGI, and then added story elements to use them. How many scenes of battle till you create battle fatigue in your audience? The best moments on Guardians, were short scenes away from the action with our central characters…too brief to sustain any goodwill toward the overblown film.

Go see The Fifth Element instead. You’ll be glad you did.

Fifth Element: 4 cups of bad coffee (Corbin Dallas can’t get the coffee pot to work) out of 5

Guardians of the Galaxy, Vol 2:  2 kiddie cups of bright-colored Kool-aid, a sugar rush but a let-down, out of 5