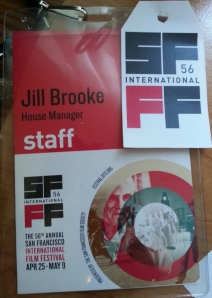 A film festivals is like a river.  Where you “ford” the river; where you step into the stream, is unique.  Your experience of the same events will often differ drastically from everyone around you.

Are you anticipating a film because you’re familiar with the director’s previous work?  Do you adore the lead actor and are you excited to spend some quality time in their presence?  Did you have to stand in the cold in a long line before you were admitted into the theater or was it nearly impossible to find parking? All of these personal concerns and anticipations will color your view.

For me, having worked in this field for so long, film festivals are almost like coming home.  I know the staff, I’ve worked the venues, and I love the thrill of seeing a film with filmmakers present!  My film-going experience is bound to be a positive one.  This year at SFIFF 56, I worked more than usual, both at the theaters and away from them.  So I had very limited opportunities to actually watch films.  Fortunately, the four features I did manage to see, were all very good.

SFIFF opened with this tale of self-centered parents battling for their child’s affections.  Based on a short story by Henry James penned 100 years ago, the damage inflicted by neglect is brought to life by the marvelous performance of the young lead, Onata Aprile.  As the pawn fought over by Julianne Moore’s aging rock star mother and the traveling philandering father, played by Steve Coogan, Onata is refreshingly open in her natural reactions.  Her joy at spending time with the actors who play her surrogate parents is a delight.  Alexander Skarsgard elevates every scene he’s in as the party boy who becomes the affectionate companion.  The story stretches credability and reason at points, (even wealthy people can’t get away with this level of neglect) and the ending is pure fairytale but there’s a level of charm here that’s hard to deny.  Rating: 3 glasses of expensive red wine

“Cutie and the Boxer” — Eccentric and Wonderful

Zachary Heinzerling’s directorial debut is the winning documentary about an eccentric painter and sculptor, Ushio Shinohara and his supportive wife and fellow artist, Noriko Shinohara.  This intimate portrait of two talented Japanese artists struggling to find an audience (and buyers!) for their creations: towering papier mache motorcycles, paintings created by “boxing” the canvas and graphic novels depicting their own troubled relationship, is both tender and finely-crafted.  Rating: 3 shots of sake

“Byzantium”–Irish Goth with some serious teeth

In one week, I found myself viewing two vampire films!  Both closer in spirit to “The Hunger” or “Let The Right One In” than “Buffy” or “Twilight”; “Kiss of the Damned” is a campy affair by a first-time filmmaker but “Byzantium” is a classy, Gothic drama helmed by Neil Jordan.  Outstanding performances by the female leads, the beautiful and very sexy, Gemma Arterton and the other-worldly, wiser-than-her-years, Saoirse Ronan bring this British Turn of the Century vampire tale to life.

Period costumes, a unique creation story and the always excellent, Sam Riley, add to this dark story of teen angst.  What to do when your mother turns your home into a house of ill repute  to support you?  When your boyfriend already looks like a vampire (Caleb Landry Jones) but your writing teacher suspects that your creative writing assignment might cut too close to the truth?  Rating: 4 glasses of red, red wine

“Ernest et Celestine”–Can a Bear and a Mouse be friends?

This delightful French 2-D animation has lovely water-color painted backdrops and a sweet story of two unlikely friends trying to survive in a world where creatures  keep to their own kind.  A small misstep in an over-long central bit spent in the mouse dental office but the drawings are so charming that it’s easily forgiven.  One of my favorite films of the festival, “Ernest et Celestine” is a charming film suited for all ages.

Join 117 other followers
Follow Drinks with films on WordPress.com