One of the pluses of summer blockbuster season is that studios take chances on science fiction films.  These are often big-budget thrillers like “Aliens” but there are also comedies like “Men In Black” and occasionally even films using science fiction to look at perceptions of identity, personal responsibility and other lofty aspirations.  Films like “Moon”, “Solaris” and “Another Earth” might be in this category.  Films that use science fiction as a way to look at human nature in another (possibly alien) light. “Oblivion” is one good example.

“Oblivion” is the rare film that gets better as it goes along.  Our narrator introduces us to the apocalyptic Earth; destroyed by an alien race, but as Tom Cruise’s character, Jack, tells us, “We won”.  Humans now reside on a moon of Jupiter and the energy to power this world is supplied by the ocean power stations on the now abandoned Earth.  Almost abandoned.  For he and his partner are stationed there manning the droids that protect the power sources.

Yet something is not right.  Though their tour of duty is soon ending, Jack is having disturbing dreams and droids are being destroyed.  Not only does Victoria (Andrea Riseborough) dress like she’s going to a corporate meeting, she also appears to not share Jack’s fascination with Earth but is, instead, focused on getting home.

Jack and Victoria share a sleek cantilevered house, complete with a glass-enclosed lap pool and landing pad for the helio-plane that looks like a big dragonfly.  Details like meal preparation, communication consoles and fun “nostalgic” touches like a bobble-head doll and NY Yankees cap bring the future and the past together and present a picture of routine; both domestic and work-related.  There are moments in the film that recall other sci-fi films (even “WALL-E” with the plant in a can) but they only add to the feelings of deja-vu that Jack is experiencing.

The middle of the film has Jack repairing droids, going on patrols and then being captured by the “Scavs”.  The “Scavs” or scavengers, we begin to suspect, are less alien than Jack has been lead to believe.  But things don’t really start to get intriguing till Julia (Olga Kurylenko) arrives. Why is the woman from Jack’s dreams in a sleep pod crashing to Earth that has been called by the “Scavs”?  Now the race to discover the truth of this tale begins to unfold.  There are some interesting twists and then as Victoria appeals to their commander for help…well, she gets an interesting reply.

“Oblivion” takes time to unfold and there are a few romantic scenes and a couple of fun chase scenes (reminding me of “Star Wars”) but the nicest surprise is a story that is more complex than a teen fantasy.  It’s only later that you may find the major plot hole that makes the story fall apart but then you’ll realize…hey, I’m still thinking about that movie! 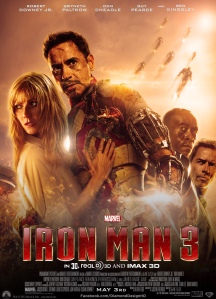 Nothing will top the the inventiveness of the first film but this is a fun entry in the Iron Man series.  Robert Downey, Jr’s Tony Stark is weary and wise-cracking.  Gwyneth Paltrow’s Pepper gets to rescue Iron Man a few times even if she must do it in her sports bra…at least it’s not in high heels like the last film!  Don Cheadle is given little to do but be humiliated as the straight man but we have two comic foils in this film…three if you count the wise-cracking kid (Ty Simpkins) who adds a certain joy to the film.  There are two main set pieces that bookcase the film and they  both seemed created to showcase the 3D effects.  Comparing the two versions, the 2D is definitely less exciting, particularly in the battle of the Iron Men.

Guy Pearce, as the unattractive geek who morphs into a power-mad scientist and the scientist played by Rebecca Hall, make their roles nuanced while the actors assigned as President and Vice President are completely bland.  Ben Kingsley is delightful as the scenery-chewing bad guy.  The story isn’t very inventive but the fired-from-within soldiers are cool and, if the ending is a lot of fireworks and not much substance, it does give Robert Downey Jr plenty of room for wisecracks.  He even asks Pepper, “why can’t you dress like that at home?” as she saves him wearing pieces of his Iron Man suit and her sports bra! 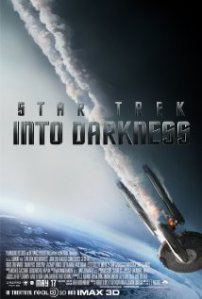 This film feels like the biggest blockbuster of the summer…certainly at 132 minutes, it may be the longest.  But you do get the most bang for your buck!  “Star Trek”–aught 2 of the re-imagining of the series, opens with a chase, goes for a big reveal (an underwater Enterprise!) and then a daring rescue and a volcano explosion!  The film is like a roller coaster ride: a tense battle and explosions…a little exposition, time for a little interpersonal drama, then more explosions or a chase…and then, well, you get the picture.  It’s fun, if a bit exhausting particularly if you’re watching it in 3D.

Chris Pine has matured since his first outing as Captain James T Kirk.  He seems to inhabit the character more fully and is bulkier.  He even seems to have a deeper, more masculine voice.  But this film belongs to Zachary Quinto as Spock and to our outstanding villain, Benedict Cumerbatch.  Both characters get considerable screen time and emotional trajectories–even the Vulcan!  There is a romantic squabble that is used for some emotional resonance but otherwise, Zoe Saldana’s character is given little to do.  Even with the long running time, each character is given what seem like cameos.

There’s a little pandering to the fan boys, especially near the end with a military  gathering that ends in a ponderous speech recommitting the Enterprise crew to “Boldly Go…”  But this film seems to now have established the characters and the new direction for “Star Trek”.  If the franchise is going, I’m sure the audiences will follow!

Rating: 4 shots of whatever is being served at the Starfleet Academy Bar