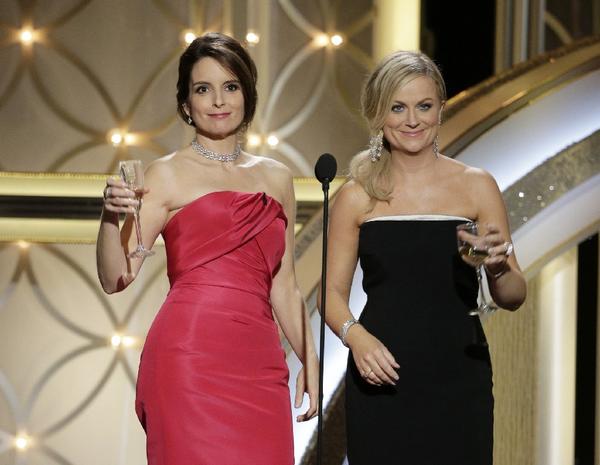 On the red carpet pre-show, our lovely hosts for the Golden Globes, Tina Fey and Amy Poehler teased that they were going to have 15 costume changes.  In fact, there were only a few gorgeous dresses (and one cross-dressing change!) but what fun to spend time with these two vivacious witty women!  Instead of making cringe-inducing remarks at the expense of those present, there was light-hearted ribbing and a few good zingers.  Best joke of the night was at George Clooney’s expense but even that was not mean-spirited.  Tina Fey remarked that his character in Gravity chose to sail off into space rather than spend another minute with a woman his own age!

The room erupted into laughter and the audience played along with Tina and Amy: Harvey Weinstein gamely pretending he might be the father to Tina Fey’s “son” and Bono making out with Amy Poehler when she won her award. Julia Louis-Dreyfus seemed to particularly enjoy the bit about being a movie snob after her charming turn in Enough Said but then later eating a hot dog once she’d come back to the” television side of the room”!

But why, oh why was the room so crowded with tables and the route to the stage made so convoluted?  Many of the award-winners had to get on the stage from behind the stage and the long zigzag route (by emotional and often befuddled actors) added to the already lengthy time between awards. And how unlikely was it that so many of the award-winners had nothing prepared to say?!  Even though they were nervous–why did they act like they’d never been on stage before?  Even Johnny Depp made a comment about “Whoa, there’s a lot of people here”!

I found Emma Thompson’s shoe-less speech very amusing and was charmed by the appearance of the real Philomena and the race car driver, Niki Lauda with the actors from the films based on their lives.  Robert Downey Jr was his usual charming self and wise-cracked about how no matter who’s name was inside the envelope; “I’ll go home a winner”! The Golden Globes seem to do a good job of spreading the awards around so that one series or film doesn’t end up on stage all evening and even if I personally thought there were other more-deserving winners in a few of the categories (Leo, really?); it was a fun show to watch.  I applaud the Golden Globes for having the foresight to book Tina and Amy for another turn at hosting next year.  They add an irreverence, and a charming (not crass) take on this parade of Hollywood movers and shakers holding cocktails, holding court and sometimes, holding awards!