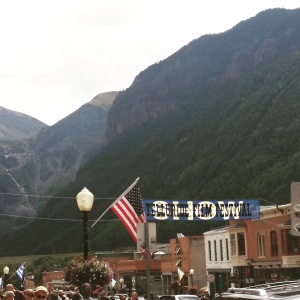 One of the wonderful things about the Telluride Film Festival is it’s eclectic film program. Restored classics, silents accompanied by music, documentaries and foreign films all vie for attention beside the Hollywood Fall offerings that are trying to garner Oscar buzz. Sadly, there are too few days and too many film-goers, so you are forced to pick and choose. That often means missing some of the smaller, often better films because there’s no way to get into the smaller screening rooms without a pass.

I was grateful that I got to see Todd Haynes’ Carol, early on. This beautiful film with it’s amazing costumes by Sandy Powell and lush cinematography gave me a lovely art-directed-to-the-gills retreat from some of the harsher films.  Black Mass was a film I wouldn’t have chosen to see and the violence left a brain scar.  Yes, Johnny Deep was unrecognizable and there should be a make-up award in the works.  But who needs to see that violence, especially against hapless women, in a trite story that’s been told countless times… Do we need another gangster film?

My favorite films transported me to another place and time. Carol is set in 1950’s America and it’s production design is remarkable.  Viva was filmed in present day Havana, in the rough and tumble of a poorer neighborhood.  Both films have characters willing to hide their true nature to keep their families intact.  In Carol, Rooney Mara is a shop girl who falls in love with an older, sophisticated woman (played by Cate Blancett).  In Viva, Hector Medina is young hairdresser and aspiring drag performer who’s father returns and tries to control his life.  In both films, the stars give such honest performances; revealing a vulnerability that it draws you into their stories.  It’s their faces that you remember, the joy at realizing a dream and finding acceptance or finding love.  Different places, different times but a struggle for acceptance that most people can relate to…and rejoice in.

My other favorite film was Ixcanul, the story of a Guatemalan teen who’s pregnancy threatens a family’s livelihood.  There’s a wonderful mother/daughter bond and an unusual filming style with static shots that capture extended scenes of daily life This charming film is full of touching moments.  The director, Jayro Bustamante is raising funds to turn a chicken bus into a rolling movie theater to screen the film for Mayan audiences who would otherwise not get to see it.

There’s was an interesting coincidence at TFF, two of the films I enjoyed, Viva and Mom and Me were both directed by Irish men.  Paddy Breathnach, directed Viva in Spanish and Ken Wardrop directed his film by way of the internet.  He found his subjects thru research online and traveled to Oklahoma to film his documentary.  It’s a delightful film about the loving relationships that some men have with their mothers.  It made me wonder why he didn’t make the film in Ireland where there would seem to be many “momma’s boys” but it also made me wish that all countries had such supportive Film Boards as the Irish Film Board!

Time to Choose is another great documentary, with a hopeful message about Climate Change.  Director Charles Ferguson lays out three areas where we’re really failing in the care-taking of our planet and offers advice on how changes to improve our world will also improve individual lives.  It was a pleasure to have a film about such a dire topic presented with facts and figures and heart-breaking footage, but also with concrete steps we as individuals can take.  It’s all about educating consumers to wield the almighty dollar and fight for change.

I didn’t see many of the Hollywood films as I was trying to focus on the smaller independent and foreign films.  I found Steve Jobs a bit exhausting.  Great performances by Kate Winslet and Michael Fassbender with snappy dialogue but almost assaultive in it’s rapid-fire delivery.  It’s interesting that the documentary Jobs is in theaters now. The discussion with the filmmakers and stars was a hoot.  Aaron Sorkin kept stealing the show but Kate Winslet was very funny.

I wish I’d gotten into see Suffragette as I really enjoyed the talk given by Meryl Streep, director Sarah Gavron and writer, Abi Morgan.  It’s so wonderful to see a female-dominated cast and production crew working in Hollywood.  One of the producers, also a woman, stood up to tell a young aspiring female director “Don’t let anyone tell you–you can’t.  They told us we couldn’t film in the House of Parliament and we hustled and we fought and we DID.  Don’t let them tell you, you can;t.  Tell them you CAN.”

I really enjoyed Marguerite, directed by Xavier Giannoli with the fabulous Catherine Frot. Set in 1920’s France, this fun film about a wealthy patron of the arts who thinks she can sing opera left the audience singing opera on their way out of the theater.  Great costumes and fabulous sets, the supporting actors all gave wonderful performances.  I was surprised to learn that it’s also been filmed by an American studio and was just picked up for distribution by Paramount at a private screening in Toronto.  This version stars Meryl Street and Hugh Grant: Florence Foster Jenkins

I was lucky to see nine films in my six days in Telluride.  I thought Laurie Anderson’s directorial debut, Heart of a Dog was a lovely meditation on the acceptance of death.  I really enjoyed the documentary on Hitchcock, Hitchcock/Truffaut, and was glad that I left after the beginning of Wake in Fright — killing kangaroos is not for me. There was only one I regret seeing, Black Mass, and many more I wished I could’ve seen.  Overall, I’d say the TFF program was not as strong as last year but the trip was worth it to spend time with some of my favorite people.  The festival has some serious issues that it needs to address in the way it treats it’s staff and patrons but it’s a great festival and such a special place to see a wonderful and eclectic program.