Women are making headlines. We’re standing up for our rights and saying #Metoo, #TimesUp and #EqualityNow.  And our voices are being heard. 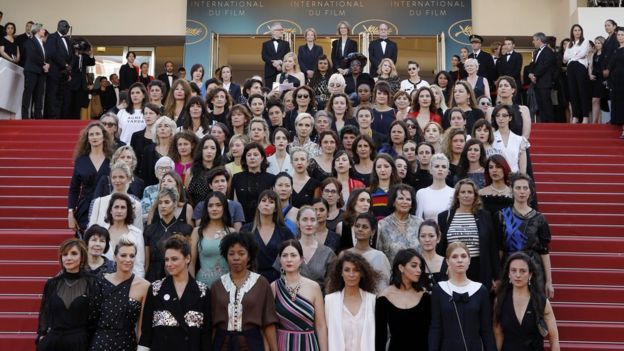 An amazing 82 women commanded the red carpet this week at the Cannes Film Festival. They stood in solidarity to show how few women filmmakers have had films in competition in comparison to the 1600 male filmmakers in Cannes’ history. Rallied by the International activist group 5050X2020, their voices were heard and they got results in a pledge to work toward gender parity at this prestigious festival!

There are a wide range of films featuring mothers at your local cineplex. This Mother’s Day, you could see a drama, a rom-com, a thriller and a comedy!  What are the messages these films portray?  It’s clear that women need support in Tully and Overboard:  Charlize Theron gives an extraordinary performance in Tully as a mother pushed to the breaking point by exhaustion and postpartum depression. The writer/director team of Jason Reitman and Diablo Cody have crafted an intimate portrait of motherhood and a rare look at one woman’s overwhelming challenges.

Anna Faris is literally Overboard as a working class mother who gets revenge on the pompous millionaire who dumps her off his yacht…by claiming him as her husband. This gender-switch to the Goldie Hawn/Kurt Russell romantic comedy gives this film a needed update. In this film, the mother has supportive friends and family and her children are in on the joke. The message seems to be that even a playboy can be saved by hard work and the love of a good woman.

Women become warriors if their children are threatened in Breaking In and A Quiet Place:  Gabrielle Union is the Mom-on-a-mission as she rescues her children from the home invaders. The thriller has the tagline: “Payback is a Mother”.  Childbirth never looked so horrific as the scene in A Quiet Place when Emily Blunt is trying to remain silent while giving birth…and she knows that aliens are hunting her family!

If you were looking for a more cheerful look at motherhood, we learn that Moms want to have fun. Melissa McCarthy plays a newly-divorced mother who decides to join her daughter at college. Life of the Party makes it seem like college is a series of fun hi-jinks. The daughter seems chagrined but accepting…and the awkward scenes between the two are played for broad laughs.

Women need support. We can be warriors. And we want to have fun. It’s wonderful to see so many films showcasing the complexities of what it is to be a woman. If you live in a major city, you could celebrate how far we’ve come with Betsy West and Julie Cohen’s documentary, RGB. This intimate look at Supreme Court Justice Ruth Bader Ginsburg is touching, inspiring and a lot of fun. This is a woman who made her mark with the awesome support of her husband, has lead the charge on gender equality and clearly knows how to have fun!

Read this nice review from The Economist about how the Notorious RGB is a “trailblazer for gender equality”.  It’s the movie all women deserve to see! Let’s all stand for gender equality by supporting films made by women, films starring women and showcasing our stories. Our voices need to be heard!