There are some films that leave you feeling moved, uplifted, or even enraged.  The Lunchbox left me craving Indian food!  Such a delightful film and oh, the food…best to plan a lunch at a nearby Indian restaurant immediately following! (If you’re living in Boulder, CO– THE LUNCHBOX is playing at the Century Cinemark, and there’s a fabulous Indian buffet at http://www.tandoorigrillboulder.com/)

The wonderful actor, Irrfan Khan, from Slumdog Millionaire and the lovely Nimrat Kaur, star as the couple that meet through the accidental delivery of a lovingly-prepared lunch box that a housewife hopes will inspire her husband to become affectionate once more.  Instead, an accountant that is unhappy at his job, begins a note exchange that will change both their lives!

There are a few too many scenes of train travel, following the lunch bag as it makes it’s way across the busy city and as Saajan travels to and from work.  But watching Ila preparing her gourmet lunches with the help of her upstairs “Auntie” is a real delight! 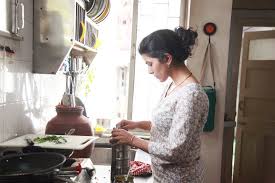 Sometimes “the wrong train can take you to the right station” and in this film, the touching drama of normal people in India that are trying to make a connection, you will be transported.  And, you may find yourself hungry…not just for food; but perhaps for a meaningful connection for yourself!

Bechdel Rating: Passes, there are discussions of the mother and daughter that do not involve relationships and the discovery of the young mother that her own mother wants more from life than surviving her husband’s death