So many remarkable things happened in such a short period of time during my trip to Telluride, that it felt as if I’d been gone for weeks rather than days!  Beginning with the amazing setting and incredible weather that left me wandering dazed along the mountain paths reluctant to even venture indoors–and ending with warm embraces from people who’d been mere acquaintances days ago!

I really lucked out with my assignment: concessions at the lovely Sheridan Opera House.  Suzanne Cheathers was the manager and, in her first year in the position, a total delight to work with — it was a tiny staff in a tiny venue and we quickly all became close (in both proximity and spirit!).  Hearing of my white-knuckle drive late at night to my B & B in Rico, Suzanne invited me to stay with her instead!  Working in such a small venue, the screenings had an intimate feeling and many of the shows were once-in-a-lifetime occasions: restorations, silent films, documentaries with filmmakers in attendance.  I enjoyed seeing Too Much Johnson, Joyful Laughter and Ed and Pauline (directed by Christian Bruno & Natalija Vekic) about Pauline Kael!  And the documentary that Gina Leibrecht finished after Les Blanks’ death called How to Smell a Rose. 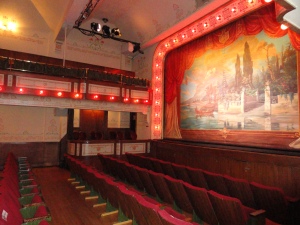 There is no way to see all the films you want to at the Telluride Film Festival but I was so glad I stayed for the late screening of The Look of Silence, the companion film to Joshua Oppenheimer’s extraordinary The Act of Killing.  This film is unlike anything in the documentary world in it’s exploration of truth and consequences.  Listening to Joshua speak about his filmmaking crusade, a journey years in the making and hearing how he put himself at risk was extraordinary.  Then to watch Adi, the subject of the film, struggle with tears and deep despair, try to explain his motivation in being in the film–wow, what a remarkable experience.

The buzz of the festival surrounded a few films: Wild Tales, Dancing Arabs, Jon Stewart’s directorial debut, Rosewater and my favorite of the festival: The Imitation Game.  Two films with big stars drew mixed reviews: Foxcatcher and Homesman and sadly, not many seemed to like Wild.  An oft repeated joke was “I wasn’t wild about Wild”,  I found the panels, free to attend and outdoors in the park, one of the highlights.  Packed with talent and star-power, it was a gathering of people that you’d never see together at any other event: national and international directors and stars chatting away about their influences and inspirations!  Ethan Hawke was so impressed with the array of talent on the panel he sat on, that he could barely talk about his film–he kept saying how overwhelmed he was! 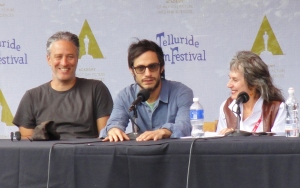 The program was not just remarkable, it was also unusual in it’s presentation.  Key films with expected audience-draw (and often star-studded) played in the larger venues but the additional screenings of each film were driven by attendance.  A surprise hit like Wild Tales (a darkly-comic film of six stories from Argentina) was moved from a small venue to a larger one and even replaced Birdman, which has more star power!  Additional screenings were added on the last day of the festival — left deliberately open for To Be Announced Screenings — that were driven by how packed the first screenings.were and how many people had to be turned away.  Saturday, two films had repeat screenings in the packed slate of films, Sunday, there were 10 films with repeated screenings and Monday was almost entirely, repeated screenings of some of the most well-attended films…

Telluride is not an easy place to travel to.  There’s a tiny airport with expensive flights, nearby towns are still a mountain-drive away and festival passes sell out quickly.  This keeps attendance to a manageable size and provides a certain cache to the festival.  Press have to buy passes to attend and paparazzi are discouraged.  Jon Stewart felt comfortable walking around town talking to visitors.  Screenings are packed with filmmakers such as Ken Burns, Mike Leigh and Francis Ford Coppola and you may find yourself sitting next to Leonard Maltin or Werner Herzog!  Staff return to favorite positions year after year and form a team of volunteers that are fiercely proud of the festival and protective of it’s reputation as a world-class event.  Telluride Film Festival is an amazing event in an amazing place made possible by the generous patronage of some well-heeled cultural icons and the dedication of a hard-working crew of hundreds.